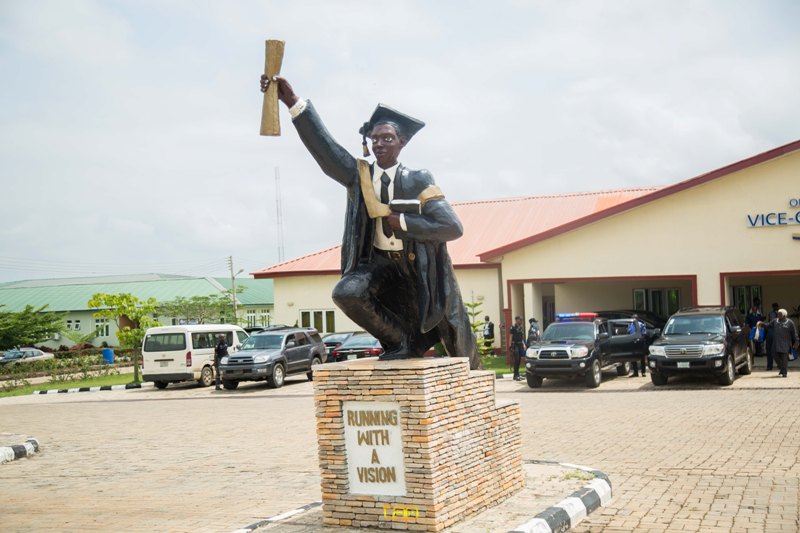 In: News By: DUAdmin 97 Comments

We were welcomed into the Vice-Chancellor’s office and thereafter we were ushered into a conference room where we were addressed by the principal staff of Redeemers University.

There, The Vice- Chancellor Prof. Anthony E. Akinlo congratulated the Chancellor on the success of the university So far and applauded the move of Dominion University to cover most fields even before take-off. He thereafter proceeded to point out pivotal areas the university has to focus on in order to ensure a smooth take off. He addressed the under-listed:

With regards to registration of students, it was advised that the University maintain a unified profiling system such that multiple registration can be curbed and data duplicity can be prevented.

4. The Vice- Chancellor’s Lodge: It was advised that the Vice – Chancellor’s accommodation be situated within the university campus for active engagements with school and student activities citing the example of RUN where it is a regular practice for all staff members, Academic & Non Academic Staff to observe Morning devotion In all their offices, same culture is passed on to the students.

5. Utilization of e- materials: Prof. Akinlo advised that the utilization of digital materials be encouraged to minimize paper usage and encourage the tech – based nature of the school.

6. Discipline of Staff & Moonlighting: According to the Vice- Chancellor, Redeemers University, Issues usually crop up with staff after a while and standards may begin to reduce but this may be curbed if the University can prepare and deploy a set of guidelines to keep the school standards in the hearts of all members of staff. Moonlighting is also an Issue that is now becoming common to academics and that through findings must be done before confirmation of appointments are done.

7.  School Rating: Prof. Akinlo laid emphasis on the Standard of the University’s website and the advantages, he encouraged the members of the P.I.C to ensure that staff of the university and students alike publish their Papers On the website periodically. He said the publications have greatly helped RUN in terms of recognition and ranking both internationally and locally.

8. Advertisement & publicity: He stressed the Importance of active publicity and advertisement of the university if the University is to get any student during the admissions exercise. He further added that the Chancellor, Bishop T.V Adelakun is still the Number One Marketer for D. U while his wife, Pastor Mrs. Dolapo Adelakun comes in second and encouraged them to use their good offices to aid the school in terms of publicity.

In his closing remarks, facing the Vice – Chancellor, Prof. Adedoyin Soyibo, Prof. Akinlo stated the place of sacrifice and that all the luxury accruing to the office of the V C may not necessarily be readily available to him.

The Vice- Chancellor’s address was immediately followed by that of the Bursar who expressed her pleasant feelings on the visit shortly after which she went ahead to advice on the following;

The Registrar, Mr. Akinniyi Adeleke reiterated the need to retain and maintain the vision of the school, stating that the number of Students shouldn’t be prioritized but in place of prioritization of Students number, the quality of students being warriors in Christ should be paramount. For recruitments, attention should be given to areas of expertise and proficiency and any and every form of employment out of favoritism be dissuaded. The continued with the issue of peaceful co-existence of employees of the university as it helps push the goals of the University. The Registrar enunciated the Challenges faced in terms of getting students which is mostly a result of the fees and the current economic conditions in the country. According to him, what has been helpful is the scholarship the school has been giving out to indigent but sound students. Monthly, RCCG parishes donate funds which is eventually used to sponsor the students by subsidizing the fees. Wards of Pastors across the parishes also benefit from the fee slash.

The registrar also echoed the need engage aggressive advertisement as it is germane to the success of the University while adding that the new wave of students have become smarter and are now engaging new vices and that Dominion University should anticipate this and put measures in place to brace for such caliber of students. He advised that a system or a program to disabuse their minds be put in place from the point of admitting these students up till they leave the university. In the case of RUN, he continued, a full week of orientation is what is used to set a theme of expectation for the students creating a training pattern with the God attitude. Creation of church oriented programs as general studies also come in handy in deterring new intakes from taking up violent or godless lifestyle. The question of which lecturers handle the general studies was raised by the Vice-Chancellor of Dominion University, Prof. Adedoyin Soyibo, the Registrar responded that the same lecturers take these courses as these courses are fully integrated into the academic calendar of the University.

To avoid expelling every student that fall short of the minimum discipline expectation of RUN, a program called the “Recovery of Destiny” has been found to be effective. The program runs for a year in a separate facility where the students and trained basically on bible oriented living. The Provost of this unit then sends in a confirmation and a declaration of wellness/fitness in form of a certificate following which the university reinstates the students. The wife of the Chancellor, Dominion University, Pastor Mrs. Dolapo Adelakun questioned about the fees of the program, the response was that the program is free of charge but where the parents disagrees to let their wards go through the “ROD”, the students can be subsequently withdrawn. RUN also periodically organize drug tests for students sporadically to be able to keep the student community and the staff community in check. The university also engages professionals to come address the students to keep them in focus and keep their orientation in place.

On the issue of security too was addressed and regarded as very cogent because of the strategic nature of the University. It was advised that the University prioritize fencing its perimeters and quickly too to avoid security threats that may prevent parents from bringing their wards to the institution.

The Deputy Vice-Chancellor, Prof. (Mrs.) Adebola Adebileje lauded the decision of Dominion University to visit Redeemers University and expressed her own view as regards the school’s disposition towards its students as it happens to encourage students to speak well of the University and it has been discovered that this has led to the increase in the school reputation and siblings now bring each other along into the University. The extra confidence they get from their lecturers, excellent accommodation, feeding, security, social life on campus and numerous student friendly amenities to accommodate the energetic teenage nature of the students. These amenities however should not cast a shadow over the level of discipline of the students. She further addressed the issue of electricity supply, adding that though expensive, the effects encourage developments in the University and concluded that the school board should consider other cost-effective alternatives.